Citizens engage in politics in different ways and voting is only one of the means that they use to express their political preferences. From the Gilet Jaunes in France to the global feminist strike, people have taken to the streets to protest against rising inequalities, welfare cuts, unequal access to education and the decline in real wages and pensions. Protests are not limited to the young and deprived but also engage well-educated groups and middle classes. They represent a reaction not only to economic grievances but also to situations in which political institutions are perceived to be closed to the demands of (particular groups of) citizens. Forms of political participation can be broken down in two macro categories: 1) conventional participation including voting, joining parties and interest groups, signing a petition; and 2) unconventional or contentious participation such as protesting, striking, occupying, boycotting and rioting. Citizens normally combine both conventional and unconventional forms of participation in their repertoire of action and the boundaries between them are not as clear cut as one would imagine. At the level of individuals, protest is a growing channel of political expression, and people that join in protests are also more likely to engage in conventional forms of participation. At the level of organizations, it is not uncommon to see protest movements evolve into more institutionalized forms such as associations, foundations, NGOs or even political parties – this has been the case of environmental movements in many European countries and the Five Stars movement in Italy. Moreover, political parties also resort to contentious forms of participation to promote their issues – see the anti-government rallies organized by the Northern League (currently just League) in Italy, or the pro-independence parties’ rallies in Catalonia. Protest is an important form of expression of political conflict in Europe. Yet, its salience varies both across countries and time (Ciccia and Guzman-Concha, 2019). In Figure 1 we show the frequency of protest events in 20 advanced economies during the period 1990-2018. This data covers events that “made it” to the news (New York Times). Although this measure does not distinguish protest events based on the types of issues raised or the claims made, it provides a comparable indicator on the relevance of contentious forms of political participation across countries. 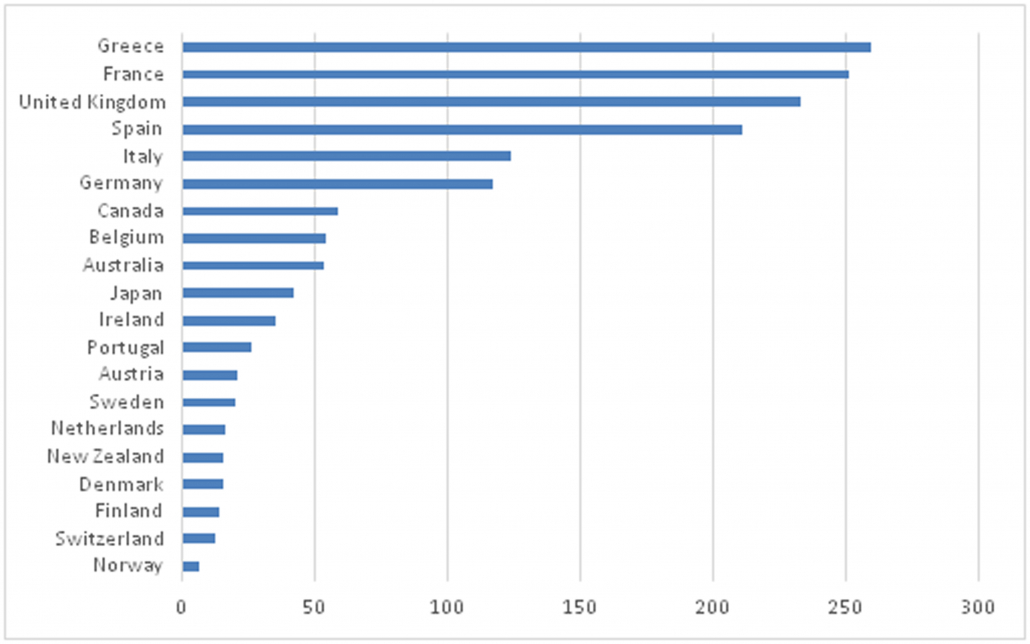 We observe that in countries as dissimilar as Greece, France and the United Kingdom, protests are very frequent. The group with a high frequency of protests includes both countries of Southern Europe, generally characterized as societies more prone to contention, as well as France, Germany and the United Kingdom with very distinct political systems. By contrast, protests are not very frequent in Nordic countries, which suggests that their citizens resort more to conventional forms of participation to voice their demands. Indeed, in such countries conflict was traditionally channeled through corporatist institutions and collective negotiations, while Swiss citizens can resort to direct democracy instruments such as referendums and popular initiatives to draw public attention to their claims. Protest frequency also varies over time. As we can see in figure 2, there is a clear increase in the number of protest events starting from 2010. This coincides with the outbreak of the economic and financial crisis, which produced rapid increases in unemployment and poverty rates across many European economies. This trend continued throughout the decade reaching its peak in 2017.

Several studies have pointed at the global financial crisis (2008-2010) and the subsequent implementation of austerity policies as factors behind major changes in Western political systems: in several countries we have observed the surge of far-right and radical left-wing parties, and overall the emergence of trends of political realignment. These new actors challenge the political order both with respect to their political demands and by the way they portray the democratic process; contentious politics is an important component of these ongoing processes (Hutter, 2014). The majority of countries experienced increases in protest activity during the past decade, although differences across countries remain significant (Ciccia and Guzman, 2019). In figure 3 we provide an overview of protest trends in the five largest European economies over the least three decades. The level of protest activity grows steeply in all countries starting from 2010, and this upward trend begins almost at the same time in all five countries. Therefore, the intensification of the protests following the financial (and Euro) crisis and the implementation of austerity is a common trend across these countries. 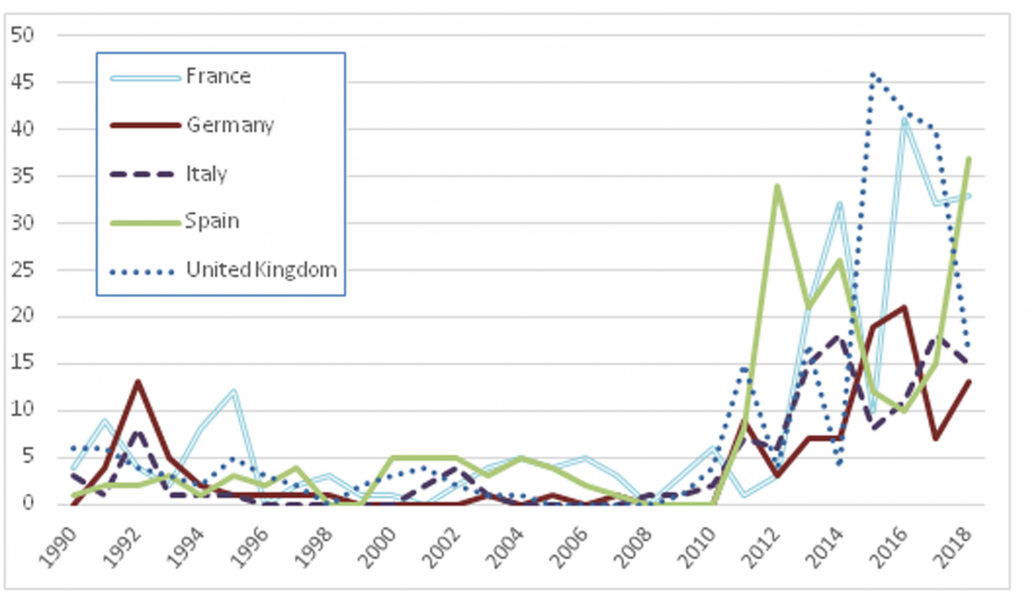 However, in the United Kingdom, Spain and France the number of protests is more than double those observed in Italy and Germany. In Spain, the 2011 peak corresponds to the outbreak of the Indignados (or 15-M) movement, which occupied public squares in major cities to denounce rising inequality in the context of the worst economic crisis since the 1970s. Following the withdrawal of the Indignados from the public squares, the Mareas movements emerged. Unlike the 15-M, the Mareas mobilized around specific areas of policy, targeting austerity cuts in public services such as education and healthcare. In France, the protests peaked in 2016, coinciding with the appearance of the Nuit Debout movement. As in Spain, the Nuit Debout took many by surprise since no platform or major trade union was behind it. Protestors took a stand against a proposal of labour reform deemed to make easier for companies to lay off workers, reduce overtime payments and severance payments. Following this movement, the Gilets Jaunes mobilization erupted in 2018. This ongoing movement campaigns against rising fuel prices and the high cost of living, especially for the middle and lower-middle classes and those living in rural and semirural areas. In the United Kingdom, protests started to rise on account of the student mobilizations in 2010-2011. In particular, students mobilized against the increase in tuition fees and cutbacks in funding for higher education by the Conservative-Lib Dem government. In 2011, on the wave of the mobilizations of the US Occupy Wall Street and the Spanish indignados, activists started the Occupy London campaign. Like its American counterpart, they denounced the lack of accountability of the financial system and growing inequalities. These examples highlight how labour and social protection remain very relevant issues for people, and even more so in the wake of the great recession.

Institutional and contentious forms of political participation belong to the same ecosystems. Treating them as a series of discrete objects neglects precisely how the entire field of politics is itself historically structured differently across countries. In some countries political conflict was traditionally channeled and peacefully resolved through corporatist institutions and collective negotiations (e.g. Nordic countries, Austria), while in others conflict remained more visible and demonstrations, protests and even forms of political violence have been regular means of political action (e.g. France, Italy; Fourcade and Schofer, 2016). A notable feature of the current historical period is diminishing electoral participation, particularly among marginalized social groups whose interests and needs are poorly represented by traditional actors such as political parties and unions. Declining voter turnout among those groups can further diminishes political parties’ willingness to take their issues on board and risks to cement divisions between insiders and outsiders. In this context, protests are increasingly used to draw attention to social problems and put pressure on public authorities. These protests represent a reaction to economic hardship and widespread dissatisfaction with existing parties and political elites. They are also an important mean that citizens have at their disposal to voice their interests in the periods between elections. As social conflict is becoming more diffused in advanced societies, protest has also gained legitimacy as an element of the democratic game. Therefore, it is important to expand the analytical frameworks to include the influence of contentious forms of political participation and their interaction with electoral politics on processes of social policy reform.

[1] The research on which this document is based has been funded by the H2020 Marie Skłodowska-Curie programme (grant agreements no.746168-AGenDA and no. 839483 MOBILISE).